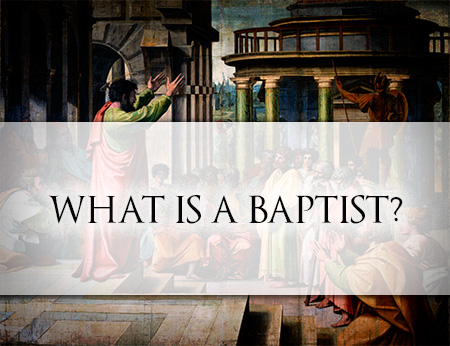 What are Baptists? Where do Baptist Churches come from?

To understand what a Baptist is, it is helpful to look at Baptist churches in the larger context of church history. Church history, from the time of Jesus until now, is a mystery to many people. The Roman Catholic Church teaches that it is the only true church, begun with Peter, and all other “christians” are departed brethren. Most Protestants think the Baptist church appeared after the Protestant Reformation. Many mistakenly believe Baptists began in England in the 16th century as a sect of Protestantism.

Baptist Churches began with the 11 disciples at Pentecost, 50 days after Jesus died on the cross.

Baptist’s have a heritage that stretches right back to Jesus Christ. Let’s begin with the Bible and work our way forward. The Bible is inspired by God and has been preserved down to our day. The Bible tells us that Christ not only started the church as we know it, He promised to build that church in every age.

Matt 16:18 And I say also unto thee, That thou art Peter, and upon this rock I will build my church; and the gates of hell shall not prevail against it.

Because this verse is vitally important, and often misquoted, it would be helpful to look at it afresh.

God often likens Himself to physical things so we can better understand Him. Jesus said He is the light of the world (John 8:12, 9:5, 12:46), the door to heaven (John 10:7-9), the water of life (John 4:13,14) etc. The primary way God likens himself to something familiar, so you can better understand what he is like, is by simply calling Himself a rock (as in a mountain made of rock). It happens so commonly that the term rock and God are used interchangeably. The writers of the Bible frequently called God either a Rock or God, often times in the same verse!

Deuteronomy 32:15…he forsook God which made him, and lightly esteemed the Rock of his salvation 18* Of the Rock that begat thee thou art unmindful, and hast forgotten God that formed thee. 30 How should one chase a thousand, and two put ten thousand to flight, except their Rock had sold them, and the LORD had shut them up? 31 For their rock is not as our Rock, even our enemies themselves being judges.

Psalms 18:2 The LORD is my rock, and my fortress, and my deliverer; my God, my strength, in whom I will trust; my buckler, and the horn of my salvation, and my high tower. 31 For who is God save the LORD? or who is a rock save our God 46 The LORD liveth; and blessed be my rock; and let the God of my salvation be exalted.

Matt 16:18 And I say also unto thee, That thou art Peter, and upon this rock I will build my church; and the gates of hell shall not prevail against it.

God, in His foreknowledge, knew that some would try to build a church on Peter, instead of Jesus Christ. In Matthew 16:18, Jesus clearly, and forcefully said the church would not be built upon Peter, it would be built upon the Rock, the immovable, timeless, indestructible ROCK…which is Jesus Christ.

Matt 16:18 And I say also unto thee, That thou art Peter, and upon THIS ROCK I will build my church;

Jesus was revealing HE is the ROCK of the Bible and the church would be built upon the solid, immovable foundation of Himself.

In Mark 12:10 &11, Jesus said to the Jews who had rejected Him as their Messiah, “And have ye not read this scripture; The stone which the builders rejected is become the head of the corner: (11) This was the Lord’s doing, and it is marvellous in our eyes?(12) And they sought to lay hold on him, but feared the people: for they knew that he had spoken the parable against them: and they left him, and went their way.”

Jesus is telling them in the days ahead, He would stop working through Israel, and begin working through the New Testament church. He, the one they rejected, would be the chief cornerstone upon which the rest of the building would be built.

Peter acknowledged that Jesus Christ was the rock upon which the church would be built. Peter said in 1Peter chapter 1 “(6)Wherefore also it is contained in the scripture, Behold, I lay in Sion a chief corner stone, elect, precious: and he that believeth on him shall not be confounded. (7) Unto you therefore which believe he is precious: but unto them which be disobedient, the stone which the builders disallowed, the same is made the head of the corner.”

50 days after Jesus’ resurrection was Pentecost. Jews from all over the world celebrated Pentecost in Jerusalem at the temple. The Holy Spirit came to indwell believers in a remarkable way, signifying the beginning of the age of the church. The gospel then spread to Jews and their non-Jewish friends living in every corner of the known world as they became believers in Jesus. However, they were no longer followers of Judaism, they were followers of Christ; they were Christians.

Matthew 28:18 And Jesus came and spake unto them, saying, All power is given unto me in heaven and in earth. (19) Go ye therefore, and teach all nations, baptizing them in the name of the Father, and of the Son, and of the Holy Ghost: (20) Teaching them to observe all things whatsoever I have commanded you: and, lo, I am with you alway, even unto the end of the world.

When someone repented of their sin, and trusted in Jesus Christ for the forgiveness of their sin, Jesus redeemed them. Jesus cleansed them of their sin, and the Holy Spirit came to live within them. They were born anew. Jesus then gathered them into New Testament Churches, just like He promised in Matthew 16:18. From that day until ours, Jesus has continued to save people, and gather them into New Testament churches where they are fed the Word of God, encouraged in their walk with God and given avenues of service for God.

In every age, every generation, there have been those who have repented of their sin and trusted in Jesus Christ alone and have been gloriously saved. These people have always gathered together into distinct communities of New Testament believers. Today, we call these communities of believers churches.

5 easily recognisable characteristics of New Testament Churches from the time of Christ to today.

In every generation throughout the world since the time of Jesus, there have been communities of born again believers who have possessed these 5 marks. These communities have been called different names in various ages and parts of the world…Donatists, Monatists, Waldensians, Baptists and others. Regardless of their name or time, they have always insisted on these 5 foundational truths. The communities have existed before, during and after the dark ages (before, during and after the “Protestant Reformation” too) and they continue into our day as Baptist Churches.

Baptists rightly trace themselves back to Jesus Christ. They are a part of a long, glorious line of people that God has redeemed, baptised and congregated into local communities throughout the world!